Days after gangrape of a young veterinarian at Shamshadbad in Hyderabad some people hiding behind the anonymity of social media, most of them Facebook users — have justified the victim’s rape, and further made vulgar comments about the deceased.

On Saturday, all the three commissionerates in Hyderabad – Hyderabad police, Rachakonda police and Cyberabad police – received complaints about some Facebook users who encouraged rape openly.

A person with the username Simley Nani, wrote a denigrating post on Facebook. He also attached photos of the victim saying, “Women deserve this for roaming in night.“

As the argument heated up, justifying his post, he commented, “All women should be raped like this.” When one person tried reasoning with him by asking, “If girls go out at night should we rape them?” For this, he responded, “What’s wrong with it?” 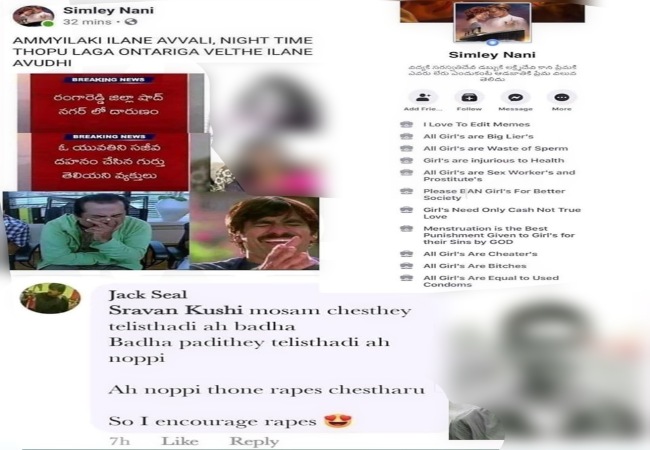 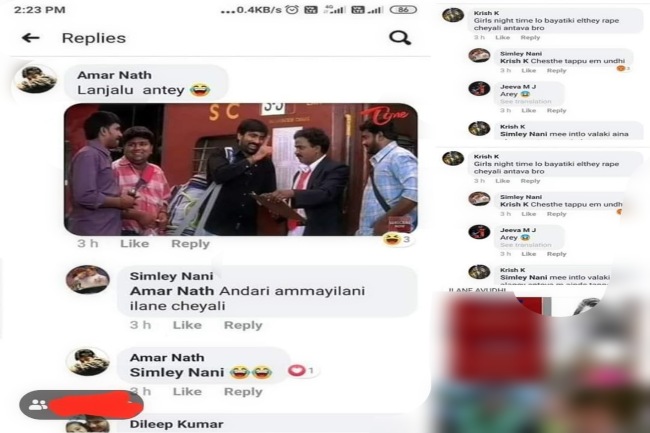 Joining Simley Nani, another person identified as Amar Nath, wrote distasteful comments against the deceased which are not worthy of being published.

Telugu troll pages on Facebook took screenshots of these comments to exihibit how rape culture is thriving and ensured that these posts go viral. As a result, the persons hiding behind the anonymity of social media were forced to delete their accounts.

Notwithstanding this, several people approached police stations and filed complaints taking objection to the comments.

Rachakonda Cyber Crimes ACP, S Harinath said, “We have written to Facebook asking the details of these users. They are yet to give them. As per our investigation, the accused are from Andhra Pradesh, and their Facebook accounts are inactive since yesterday.”

Similarly, Additional DCP Cyber Crimes Hyderabad, KCS Raghu Vir said, “We have taken suo-motu action. We are following up with Facebook. Only when they cooperate, we will be able to nab the offenders.”

Both the officials said that the offenders could be prosecuted under Information Technology Act along with with IPC sections of 509 IPC (Word, gesture or act intended to insult the modesty of a woman).

Police said that they are monitoring social media. They will take action against those who make offensive remarks against the deceased and attempt to denigrate women in general.

Dozens killed by suicide bomber at funeral in Afghanistan

Man drowns 3 daughter as wife refuses him money for liquor

Kamal Hassan had kissed Rekha without consent in Telegu movie