Aptly described, born as a dog retired as soldier. Seven dogs that were part of the Central Industrial Security Force (CISF) retired with full military honours on Tuesday. They served a total of eight years with the para-military force. “Born as a dog, retired as a soldier,” the CISF posted the message from its Twitter handle, as it shared pictures of the function.

The dogs were part of the CISF team attached to the Delhi Metro. The retired officer dogs were given mementos, medals and certificates at the ceremony organised by CISF unit of Delhi Metro (DMRC).

According to a report, it was the first time in its history that the unit organised such a “retirement” function for dogs that served the force.

Born as a dog, retired as a soldier…
A Farewell ceremony for 07 #K9 members of #CISF organised @ CISF Unit DMRC Delhi. They were handed over to NGO @Friendicoes_DEL, New Delhi. Thank you for your services !

“Born As A Dog, Retired As A Soldier”: CISF Honours Canines On Retirement https://t.co/bWJCDvHVkS pic.twitter.com/cTlSd0nsFE

The CISF also posted a message on the Twitter handle appreciating the canines for their dedication and devotion to duties. 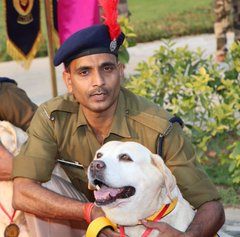 The highly trained dogs enjoyed special treat during the ceremony for being highly devoted. They were later handed over to a Delhi-based NGO.

16 out of 78 Afghans evacuated to India test Covid +ve

I took notes of farmers in Tihar on my legs: Mandeep Punia

Situation along LoC could escalate any time, be prepared: Army Chief