Thirty-year-old doctor from Karnataka committed suicide for being denied leave for his sister’s wedding.

The victim was pursuing his MD course from PGIMS, Rohtak in Haryana. He allegedly committed suicide in the hostel of the hospital’s campus, police said on Friday.

Onkar, who came from Dharwad in Karnataka, allegedly hung himself from the ceiling of his hostel on Thursday night, Rohtak Police Station SHO Inspector Kailash Chander said.

Chander said Onkar was pursuing his MD course in paediatrics and took the extreme step allegedly due to harassment he faced from the department head.

“Although he did not leave any suicide note, Onkar’s colleagues and family members alleged that his head of department used to harass him. Allegations have also been levelled that she did not grant him leave to attend his sister’s wedding, which was due in a few days,” the SHO said. 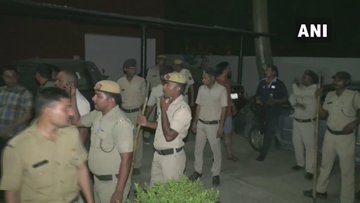 “We have booked the accused under Section 306 IPC which pertains to abettment to suicide. No arrest has been made so far and further investigations are under way,” he said.

Meanwhile, after the doctor committed suicide at about 11.00 pm, some of his colleagues protested demanding immediate arrest of the doctor who allegedly used to harass him.

Fed up with his wife’s “Puritanism”, man kills her; then hangs himself

Hiding slums from Trump in Gujarat & showing govt schools in...

The Hush Post (SKV) - February 14, 2020
The Hush Post| 2:40 pm|one-minute-read| A 32-year-old Punjab judicial magistrate was killed and three others were injured after their car rammed into a pole on...

Corona virus was predicted as Wuhan-400 about 40 yrs ago in novel Eyes of...

Two Fortis doctors arrested for medical negligence & death, to be...