Rajeshwari, is a Hindu and a daughter of Khadija, a Muslim woman. Wearing a traditional silk wedding sari, with pink and golden hues, Rajeshwari from Kerala’s Kasaragod district, bent down to touch the feet of her mother to receive her blessings. Her mother, Khadeeja, dressed in a burqa, touched Rajeshwari’s head.

This was the heartwarming scene of religious harmony that took place at a wedding in the state on Sunday.

22-year-old Rajeshwari is the daughter of Abdulla and Khadeeja, a Muslim couple in Kasaragod district.

On Sunday, she married Vishnuprasad, a Kanhangad native, at the Manyott temple. Across the state, there is widespread respect and admiration for Rajeshwari’s foster parents. They are Muslims. However, they conducted a traditional Hindu wedding for their daughter.

Rajeshwari, who was born in Thanjavur in Tamil Nadu. But she was adopted by Abdulla and Khadeeja at a young age after both her parents passed away.

Rajeshwari’s parents worked in Abdulla and Khadeeja’s farm, which is how Rajeshwari first met the family.

“She came here when she was seven or eight years old. After the death of her parents, she did not return back to Thanjavur. Now she is 22,” Abdulla said. 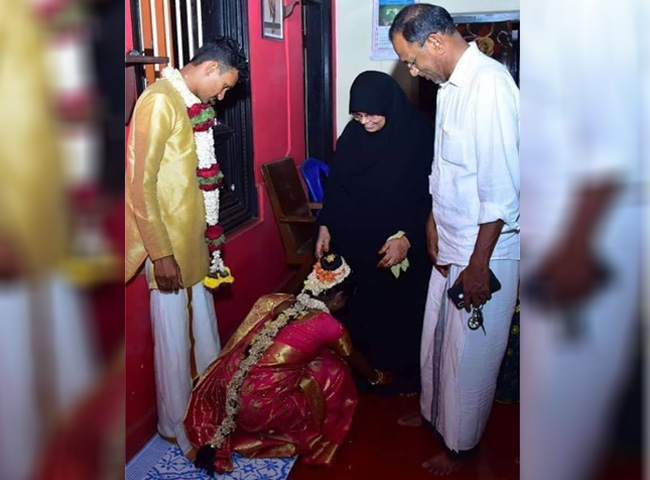 Though she had gone back to Thanjavur for a while, she soon returned to Abdulla and Khadeeja saying she did not want to go back. From then on, Rajeshwari grew up with the couple’s three other children as their daughter.

When the possibility of an alliance with Vishnuprasad came up, Abdulla and Khadeeja visited his family.

“We had told a few people to get her a good boy. A few boys came but we did not like them after a detailed inquiry. We were very particular about the character of the boy who would marry our daughter. Our main demand was that he should be a teetotaller,” said Abdulla.

Vishnuprasad, the son of Balachandran and Jayanti in Puthiyakotta, had hoped to conduct the wedding at a temple. However, the families had to search for a temple that would allow Rajeshwari’s Muslim family to enter. Finally, they found the temple at Manyott and moved ahead with wedding preparations.

On Sunday, as the wedding ceremony neared, Abdulla was standing at a distance from the sanctum sanctorum of the temple along with his brothers. But he was soon asked to move in front and stand closer to the family of the groom, Mathrubhumi reported.

The wedding was attended by relatives and friends of both families, as well as representatives in the region.

9-month-old crawls into the middle of road, crushed to death under...