The Kartarpur Corridor was inaugurated by Prime Minister Narendra Modi with much fanfare on Saturday. It has been done three days ahead of the 550th anniversary of founder of Sikhism, Guru Nanak Dev.

Congress MLA Navjot Singh Sidhu has been given clearance by the Centre to visit the Gurdwara Darbar Sahib.

Pakistan held a separate event on the other side of the border, with the country’s Prime Minister Imran Khan declaring it open from the other end of the Kartarpur Corridor.

PM Modi inaugurated the Integrated Check Post, where pilgrims will get clearance to travel through the newly-built corridor.

Before the inauguration ceremony, the Prime Minister offered prayers at Ber Sahib Gurudwara at Sultanpur Lodhi. 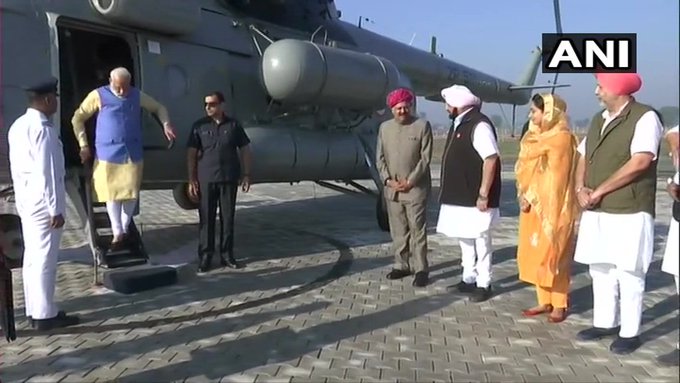 PM Modi also participated in a public programme at Dera Baba Nanak after the inauguration.

Dera Baba Nanak is likely to receive some 30,000 pilgrims daily for four days between Friday and Monday. The pilgrims will be accommodated in 544 European-style tents, 100 Swiss cottages and 20 darbar-style tents on a 30-acre plot.

Is this Amitabh Bachchan or his lookalike |Have a look at...

The Hush Post (SKV) - January 22, 2020
The Hush Post| 9:01 pm|one-minute-read| CBSE has agreed to use of calculators in examinations for class X and XII but there is a special clause....

The Hush Post (SKV) - January 25, 2020
The Hush Post| 11:26 am |one-minute-read| A newborn died after a group of eunuchs snatched him from the mother's lap and started dancing, demanding money...

The Hush Post (SKV) - January 23, 2020
The Hush Post|12:35 pm|one-minute-read| A woman and her two children have been found murdered at their house at Modern Housing Complex, Manimajra. The incident took...