In a marriage season of sorts with celebrity marriages coming up one after another, badminton stars Saina Nehwal and Parupalli got married in a simple ceremony on December 14.

The couple took to Twitter to announce their marriage. “Best match of my life…#justmarried,” she wrote in twitter.
Both the badminton stars had extended their wedding invitations to coach Pullela Gopichand and other celebrities along with some ministers. 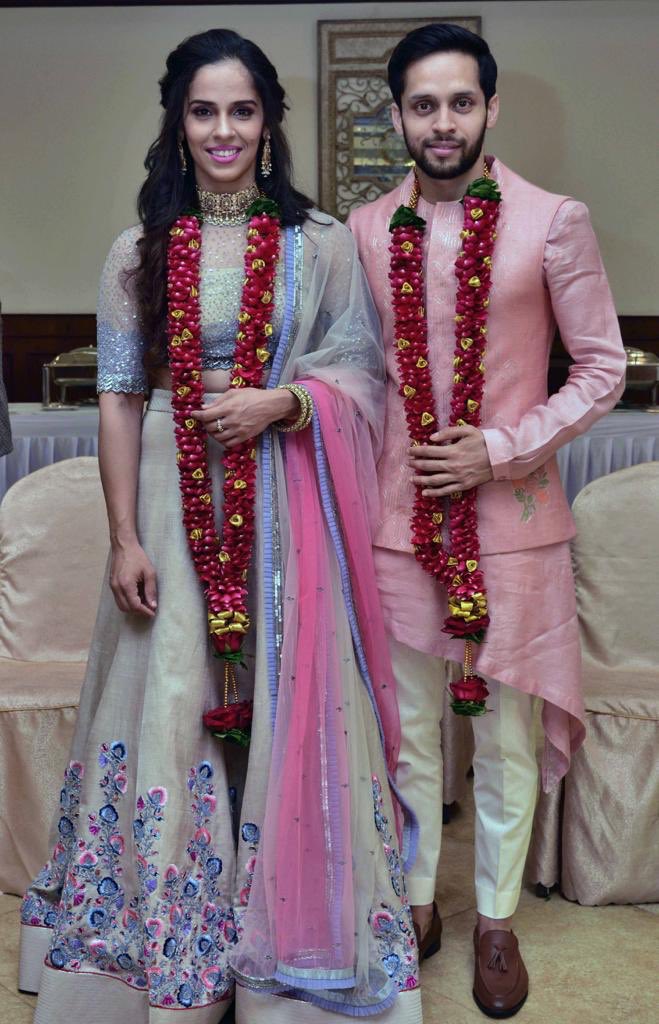 “Saina got married as per court rules today at about 11.30 am,” her father Harvir Singh told PTI. The wedding took place at Saina’s residence in Orion villas at Raidurgam in Cyberabad.

“It was a small gathering of about 40 guests, including relatives of the Saina and Kashyap’s families,” Singh said. The reception is slated for December 16.
Saina wore a powder blue lehenga and minimal makeup and jewellery. Kashyap was dressed in a pink kurta and white pyjamas.

Saina and Kashyap, who met at Pullela Gopichand’s academy, were in a relationship for about 10 years. They have been training with Gopichand since 2005. Nehwal had confirmed the news of their wedding in October. The couple never came out in the open regarding their relationship.
In November, they had started extending their wedding invitation to guests like Telangana MLA KT Rama Rao, film star Chiranjeevi, owner of Hyderabad Hunters (PBL franchise) VRK Rao.

With Deepika -Ranveer, Priyanka-Nick, Isha Ambani-Anand Piramal, Kapil Sharma- Ginni chathrath and a host of other marriages from the entertainment industry, the end of 2018 seemed to have started new beginnings for a lot of couples.

Will Olympics be held, delayed? The tour of torch relay has been cut short already

The Hush Post - May 22, 2020
The Hush Post| 19:12 pm|one-minute-read| A Pakistan International Airliner from Lahore with 90 passengers and eight crew on board, crashed near the Karachi airport. The...

2-month-old dies in Punjab due to COVID-19

The Hush Post - May 22, 2020
The Hush Post| 10:18 am| one-minute-read| Born in the times of Corona Virus and couldn't live beyond it. A two-month-old boy who had contracted coronavirus...

The Hush Post - May 23, 2020
The Hush Post| 20:57 pm|one-minute-read| A senior doctor at Delhi's All India Institute Of Medical Sciences (AIIMS) died of COVID-19 on Saturday. Dr Jitendra Nath Pande...

The Hush Post - May 21, 2020
The Hush Post|20:04 pm|one-minute-read| Indian air carriers will resume operations from 25 May with one third capacity and stringent protocols. These include flights to key...

MS Dhoni dropped: Fans up in arms as selectors drop him...