Days after protestation, anger and grief over the Telangana veterinarian’s rape and murder, a ‘filmmaker’ has enraged social media with his outrageous post.

The posts features remarks like women should “carry condoms and cooperate in rape”. Daniel Shravan, who was lacerated on social media platforms for his misogynistic comments, later deleted his profiles.

He got his publicity if that was the purpose but probably wouldn’t have wanted it this way.

Daniel Shravan’s now-deleted Facebook post is titled “Rape Is Not Serious Thing But Murder Is Inexcusable”. Among other things, it says “rape without violence” should be allowed.

“If court, government and law give an excuse for rape. Rapists wouldn’t get thoughts of Murder after (sic) rape,” he says.

“Murder is a sin and a crime. Rape is a corrective punishment. …Instead of dialing 100 (police emergency number) carry condoms with U… Women safety is only possible through condoms not through Nirbhaya Act,” this man says.

Actor Chinmayi Sripaada shared a screenshot of his outrageous post.

“Ideas going around. Some of this content is in Telugu. Basically the ideas these men have given is – cooperate and offer condoms to prevent murder after rape, women’s organizations are the reason for rape. Rape is not heinous, murder is,” she tweeted.

Many Twitter users joined the actor in slamming the remarks.

“What is “Rapes Without Violence?” And this guy is not some anonymous profile. He is a movie maker goddamn it,” another Twitter user wrote. 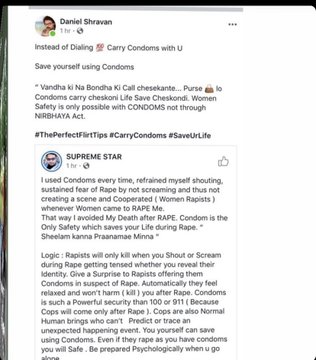 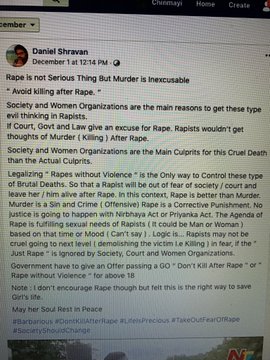 Are cheap tricks being used so that Kejriwal can’t file nominations? He has token no. 45 and is waiting

SAD not to contest Delhi polls; cites differences with BJP over CAA, NRC

Boost to ‘Make in India’ or absurdity of capitalism? Pattals find way to big retail stores, and at exorbitant prices

The Hush Post (SKV) - January 19, 2020
The Hush Post|11:51 am|one-minute-read| A Pakistan born woman in Pakistan is a sarpanch in Rajasthan. 36-year-old Nita Kanwar was on Saturday elected the sarpanch of...

Are cheap tricks being used so that Kejriwal can’t file nominations? He has token...

Imam in Uganda discovers that his wife is a man after two weeks of...

Not as fortunate as Wg Cdr Abhinandan, 3 times ex-national badminton...